Posted at 08:54h in ONE SHADE SAILS by One Shade 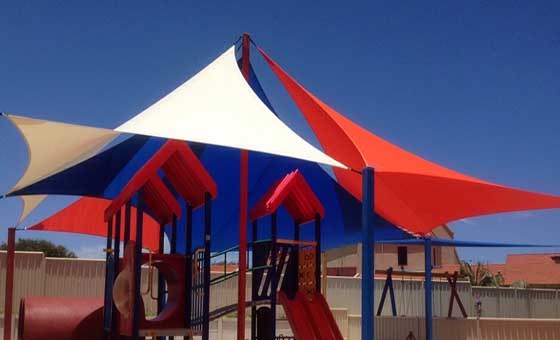 Residents will have until July 1 to comment on the policy that will facilitate installation of shade structures at selected City playgrounds.

Of the City’s 231 playgrounds, 19 have shade structures – four at parks (northern playground at Tom Simpson Park, Harbour View Park in Hillarys, Blackall Park in Greenwood and McIntyre Park in Burns Beach) and the rest at community facilities such as kindergartens.

The City has received about 70 requests in the past three years for more.

Consultants undertook an audit of playground areas last year and an action plan was developed to manage the provision of natural shade at City parks into the future.

While tree planting is the highest priority method for shading the City’s playgrounds, shade structures could be considered if the playground has high patronage, is near other amenities that encourage long stay such as barbecue and picnic facilities, sporting facilities and toilets, has conditions where trees are difficult to establish or playgrounds are too large to shade with trees.

Shade structures cost about $30,000 to install, which would be between $6 million and $7 million across all of the City’s playgrounds.

If adopted, the shade sail policy will complement the City’s tree planting program that provides most of the City’s playgrounds with natural shade.

Residents can complete a community feedback form available from www.joondalup.wa.gov.au or request a hard copy from the City.

Community feedback will be incorporated into a final report that will go before the council later in the year.